The Gyeonggi-do province of South Korea is one of the largest and most populous one, just adjacent to Seoul. This province finds its capital in Suwon, the largest metropolis of the area. Suwon is the sole remaining walled city in all of South Korea, known as ‘the city of filial piety’. While Suwon is primarily known for the UNESCO World Heritage Site, Hwaseong Fortress, that is not the only place one can visit here; in fact, you will be amazed to see that this capital packs a whole lot of fun things to do and exciting places to visit.

Declared as a UNESCO World Heritage Site in 1997, Hwaseong Fortress is a phenomenal structure, dating back from the latter period of the Joseon era. It roughly occupies an area of 5.52 kilometres and is protected by four gates, Changnyongmun, Hwaseomun, Janganmum and Paldalmun, in the directions of east, west, north and south, respectively. The fortress, built as ‘filial piety’, is a scientifically accurate structure, with all of the details and intricacies of the structure recorded in the Hwaseong Seongyeok Uigwe Document of 1801. A number of amazing performances and unique events are held in Hwaseong every day; in fact, it is also the permanent venue of the annual Suwon Hwaseong Cultural Festival. This Historic Site No. 3, as deemed in 1963, is the perfect place to start your Suwon exploration, as it delves deep into the Korean traditional history.

Hwaseong Fortress is a perfect tourist spot, offering a bunch of activities to the visitors. On the north-eastern corner of the fortress, visitors can enjoy the experience offered by Yeonmudae. When it was built, Yeonmudae worked as a training ground for the soldiers for more than a century, where they were taught combative skills, including spears, swords and obviously arrows. It is now an amazing military observation post, offering a complete view of the insides of the fortress. It also has an archery centre, as it is a sport Koreans truly excel in, especially during the Olympics. This Archery Centre offers to teach archery to the visitors; you can even don on the traditional Korean Military attire during the session.

Paldalmun Gate, alternatively known as Nammun Gate, is situated at the south of Hwaseong Fortress. It was built in the 18th century when King Jeongjo was the ruler. The right wall of the gate consists of an intricate plaque, carrying the names of the construction workers who built the gate. An ongseong, i.e. a crescent-shaped wall, circles one side of the Paldalmun, which acted as a secondary protective wall for the structure. A large passageway runs between these two walls, purposely made so as to help the royal vehicles and horses comfortably pass through. This historic landmark is National Treasure Number 402 and has been repaired and restored a decade ago.

No, a temporary palace doesn’t mean it is of a fickle or superficial nature; in fact, it is as strong and sturdy palace as any other. A haenggung – Korean name for the temporary palace – is where the king and the royal family would use to retreat during the wars. Hwaseong Temporary Palace is one of the largest haenggungs around South Korea and was used by the kings from the Joseon era. King Jeongjo would even stay there during his trips to his father’s tomb, making it his seasonal house. This haenggung is situated just inside the Hwaseong Fortress walls and is a lively place, conducting reenactment shows as well as mesmerizing sword fighting performances and traditional events and activities.

Suwon Hwaseong Museum is a place where you can learn everything about Hwaseong Fortress which is a recognized UNESCO World Cultural Heritage Site. This museum offers systematic and extensive knowledge of the Joseon Dynasty. The place has preserved original letters and architectural plans as well as models and maps. The 1801 Hwaseong Seongyeok Uigwe Document is still intact and you can actually find all of the small and intricate details, including the personal details of the workers constructing the Suwon Hwaseong Fortress. There are exhibitions and items also showing the plans and the development of the fortress. This museum is a mesmerizing place where you can easily lose track of time once you have stepped in there.

Korean Folk Village is situated in the east of Suwon and is a rich place to learn about the Korean history and culture of the late Joseon era. It a complete village, maintained so as to reflect the earlier days from Korean history. Structures of the Confucian academy, village school, i.e. Seodang, houses, a farming village, distributed into official districts and connected with village streets. You can also enjoy some amazing traditional performances here, including a Korean wedding ceremony, nongak, i.e. farmer’s music and even horseback martial art, to name a few. There’s also an ice sledding site, markets and a volcano site in the middle of an expansive family park. You can also enjoy a variety of delicious traditional Korean rice cakes in this Folk Village.

Yungneung and Geolleung are two tombs, dating to the Joseon dynasty, in 1816 and 1821 respectively. It is just a little bit outside of the city, nestled in a pleasant oak parkland. These tombs, just like the Royal Tombs of the Joseon Dynasty, have been declared as the UNESCO World Heritage Site. Yungneung is the tomb of King Jangjo and Queen Heongyeong, whereas Geolleung is the tomb of King Jeongjo and Queen Hyoui, with both of them being almost identical to each other. The grassy mounds of the tombs are surrounded by stones, which are in turn have lotuses carved on them. The tomb is filled with amazing traditional symbolism offering a wholesome look into Korean history. You will even find people having picnics and spending quality time with their loved ones.

The Nammun region of Suwon is well-known for its variety of markets, filled with all kind of shops and stalls. Two of the prominent ones here include Yeongdong Market and Jidong Market, which together form the big marketplace called as Suwon Paldalmun Market. It has historical importance, as it is the only market in the whole of South Korea to have been found by a king. Yeongdong market is characterized by street-food vendors, Korean pancake stalls and fashionable clothing shops; whereas Jidong market is primarily famous for Sundae and various pork parts. Both of them offer traditional garments and accessories on sale, along with a large list of other necessary knick-knacks. These markets will provide the things you wish to purchase as well as give you a fascinating experience of Korean culture and generosity.

Manseok Park is a pretty urban park, just adjacent to the Suwon Arts Centre, built right around a reservoir. The reservoir was excavated in the 18th century under Jeongjo of Joseon, in order to water the paddy fields. This large water body then got a park built around it, complete with long paths, lawns and beautiful cherry trees. The park has around 12 clay courts, belonging to the North Suwon Tennis Club. Along with a number of sports facilities, a permanent stage in a neatly paved area nestles on the eastern side of the park and is seen hosting a number of outdoor events and other celebrations all year round, whereas on the Southside of the park houses the Suwon Arts Centre.

Samsung Innovation Museum is a mesmerizing place, found in 2014, where you get to learn about the evolution and the development of the electronics industry of South Korea. This museum is an amazing place, divided into three neat little halls, where visitors can learn more about the present as well as the past and the future of Korea’s electronic industry. Right from the history and development of the electronic industry, along with the present development and future predictions. It also has an education facility, by the name Children’s Display Research Institute. More on mobile industries.

The Toilet Museum was created by Sim Jae-duck, the former mayor of Suwon. He got to be officially known around as ‘Mr. Toilet’, after he led an inspiring campaign around the city, in order to spread awareness on improving the toilet sanitation of Suwon. He then became the first president of the Korea Toilet Association and redid his entire house to resemble a giant toilet in order to celebrate the foundation of the World Toilet Association. The house to the city after his death which then became a full-fledged museum. It is alternatively known as ‘Haeujae’ – a term used by temples for restrooms - which means ‘a house to relieve one’s concerns’. Visitors here can enjoy amusing exhibits, along with learning more about the technology.

Also known as Big Bird Stadium, because of its huge wing-shaped roofs, Suwon World Cup Stadium was established in 2001. Just the next year, the 2002 World Cup was conducted there, giving it the name of World Cup Stadium. It had hosted three group matches as well as the round of 16 matches among Republic of Ireland and Spain. It is located on the east side of the city, just a few kilometres away of the Hwaseong Fortress. The Suwon Samsung Bluewings, who is the four-time K League Champions, are seen playing on this grassy expanse frequently. The stadium also houses a beautiful World Sculpture park, a large pool, a classic museum and even a driving range.

Suwon Art Village - alternatively known as HangGoong-dong ByeokHwa Maeul or simply, HangGoong Art Mural Village – is situated right next to HangGoong, one of the palaces at the Hwaseong Fortress. It is a quaint neighbourhood, drenched in vintage charm, which has been transformed into a beautiful art village. The villagers of this run-down area asked a few of the talented artists to paint the village in their own creativity. This area – which also houses several galleries - is an aesthetic labyrinth of murals painted over by locals and international muralists. The Suwon Art Village has been, since after the transformation, one of the most-visited tourist attractions in the whole of South Korea.

Suwon is home to this beautiful Buksuwon Spa, where you can wash all your stress away in less than an hour. It is actually a jjimjilbang, which is a Korean term for expansive public bathhouses, complete with showers, hot tubs, massages and traditional saunas. Along with spas, an attractive addition of this jjimjilbang is the availability of a variety of saunas, all with different heat levels - right from a cold 15°C to a hot 45°C - so that the visitors can adjust the heat the way they prefer. The water is pleasant and healing, as it’s drawn from hot springs. There’s a gym, a movie room, a computer room, a play area for children and other useful facilities, along with free Wi-Fi.

Suwon is one of the primary places where Korean history took shape and made the place it is today. The place is culturally rich and thriving, filled with not only a seemingly infinite number of historic attractions but also with contemporary ones, such as unique museums, relaxing spas and huge stadiums.

Best Things to Do in Seoul

Best Things to Do in Daegu

Best Things to Do in Incheon

Best Things to Do in Daejeon

A treasure trove of award-winning floral displays, Barnstaple is a former river port in North Devon. It is the largest city and the economic and cultural centre point of the 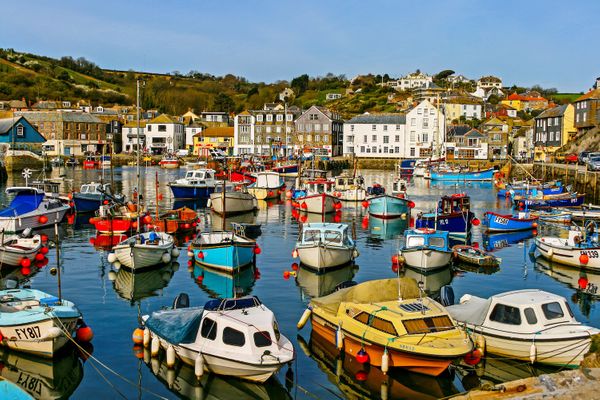 A gem of Cornwall, St Austell is ab old market town located just a few miles away from the city of Bodmin. Until the 18th century, St Austell was only