See also: Best Things to Do in Kyoto

Arashiyam (which literally means the “storm mountain”) is a district located on the western outskirts of Kyoto, the present-day seat of Japan’s Imperial throne. The Oi river forms the backdrop of this tranquil yet beautiful district. The district is rich in history and has been designated as a historic site. It’s the second most sought after destination for tourism in Kyoto. The district is celebrated for its lush bamboo groove and its sacred temples and shrines. The area is a must-visit for nature lovers and to those who are seeking to experience the uniqueness of culturally significant structures. Given below are the

Have a trip to the soaring stalks of Arashiyama Bamboo Grove

The bamboo grove is one of Arashiyama’s most preferred site and there is a compelling reason for it. The serenity and the calmness of this groove are bound to bring about peace in one’s mind. Walking through it makes one feel as if they have been transported to a fairytale world. The beauty of the forest is bound to bring joy to one’s mind and a sense of otherworldliness. The bamboo groove is quite photographic but no picture can truly capture the wonder it is. It is no wonder this is one of Kyoto’s top sights to visit. The groove is best paired with a visit to the Tenryu-Ji temple since the groove is quite closer to the temple’s northern entrance.

Ranked first among the city’s five prominent Zen temples, it is the most important temple in Arashiyama. The temple was registered as UNESCO World Heritage site. The temple was built by the ruling shogun Ashikaga Takauji in 1339 and it is dedicated to the Emperor Go-Daigo. The temple was built to appease the spirit of the former emperor. The temple is surrounded by a gorgeous garden built by Muso Soseki and it still exists in its original form despite the temple itself undergoing numerous renovations. The landscape also features a central pond surrounded by the lush forest of Arashiyama mountain. The temple is quite close to the Arashiyama bamboo grove and can be accessed through its northern entrance.

The park houses about 170 snow monkeys (also known as Japanese macaques), a species native to Japan. The park is quite easily accessible by train. Tourists can feed the monkeys with food but they are advised not to stare at the monkeys nor touch them. The visit typically lasts about 1-2 hours and can be accessed from 9 am – 4:30 pm/5 pm.

Nonomiya-Jinja shrine – A sanctuary for a princess

Other than the sacred Tenryu-Ji temple there lies another temple amidst the serene bamboo forest and this shrine is none other than the Nonomiya-jinja shrine, a shrine that served as the temporary sanctuary for princesses. The Nonomiya-jinja shrine is where they spent about one to three years so as to undergo purification before they are taken to the Isa shine in a grand procession. This shrine is a favoured haunt of women despite it being a small shrine.
It is believed that a visit to the shrine can aid a woman in her matchmaking process. It can also ease child delivery. The temple is surrounded by ema (votive tablets) of different shapes and colours. A visit to this temple is bound to bring peace and hope, especially to a female tourist.

This temple is a Buddhist temple located in the Sagano district of Arashiyama. Situated a little towards the north of the Gioji Temple, it is in close proximity to the famed bamboo path. The temple is quite well known for its thousands of unmarked gravestones that have crudely carved images of the Buddha. These are the graves of the poor commoners buried outside the city from the Heian period onwards. The stones are lit by candles during a ceremony known as Sento Yuyo (commemorated on the 23rd and 24th of August). The ceremony is conducted during the evenings of these days with a view to appease the souls of the dead. During this time, Sutras are chanted. One can participate in this festival if they were to visit the temple during those dates. Tourists can visit the temple from 9 am to 5 pm in the evening.

The beautiful Togetsukyo bridge is quite well known for its picturesque effect which can be seen in Japanese period- drama. Its name means the “moon- crossing” and it is believed to have come from the tale of Emperor Kameyama who while attending boating thought he saw the moon cross the sky. There are restaurants on either side of the bridge and during summer one can watch the traditional cormorant fishing from the bridge. A short stroll along the banks of the river will take on to a boat- rental spot where one can spend some time on the beautiful waters. This is also a popular spot for playing during the warmer months. This bridge is a sight to behold especially during the Koyo season, a time when the cherry trees are in full blossom.

This forest, unlike the others, is quite different and unique, It is a collection of gorgeous cylinder-shaped pillars that frames laneway to Randen tram. The pillars are clustered like the trees of a forest and the kimono is displayed on each of the cylinders. The forest consists of pieces that are dyed in the traditional Kyo-uzen technique. The pattern for each kimono is selected by the artist Yasumichi Morita. The recommended time to visit is during dusk so that one can see many of the pieces illuminates using LED lights.

Tourists who visit Arashiyama must also experience the Hozugawa riverboat cruise since the cruise is not just a normal cruise along the river but also serves as a sightseeing cruise. The boat rides down the Hozugawa River from Kameoka to Arashiyam. The cruise is done in a traditional style using flat bottomed boats captained by boatmen with oars and bamboo poles. It takes about two hours to make its way down the river and the ride is quite relaxing so that the tourists can enjoy the natural surroundings. The cruise is at its peak from mid-November to early December as its quite popular during this period.

Take a stroll in the Saga Toriimoto Preserved Street

The majority of this street heading towards Adashino Nenbutsuji temple has been maintained in its original style. Many of the buildings are designed in the traditional machiya form and these buildings had initially served as homes but were later on converted into shops and restaurants.

Pay your respects at the Jojakkoji temple

This temple was established at the end of the 16th century and it is a Nichiren temple. The temple is situated on the side of Mt. Kokura. The temple is well known for the autumn leaves.  It is a beautiful temple with no walls and its view is quite serene and mystique. Tourists can visit the temple from 9 am to 5 pm in the evening.

This villa was the home of the late Denjiro Okochi, a major star of the 1920s during the silent movie era. The villa and its garden approximately cover about twenty thousand square metres. The area includes several magnificent views and elegant gardens. The view is certain to make one in awe. The building and the villa took about 30 years to be completed.  Denjiro Okochi also planted a garden the highlights the four seasons. The compound also includes a Momoyan styled shoin, a temple constructed according to the Kamkuro- jibutsudo style and a tea hut.  There are also several stone Buddha statues and an observatory platform. The villa is accessible from 9 am to 5 pm.

Take a romantic trip in the Sagano Scenic Railway

The Sagano Scenic Railway is owned by the West Japan Railway Company. The company operates the Sagano Scenic line. The line is locally known as Torokku in Hozu gorge. The train passes a gorge and offers a scenic view of the Hozu river to its passengers and the ride terminates in the basin of Kameoka. The train is quite old fashioned and takes about 25 minutes to complete the seven-kilometre journey, giving its passengers an ample amount of time to enjoy the beautiful external view. The train is quite popular during the autumn season. The passengers can choose to combine the ride with the Hozugawa river cruise and if chosen a bus will take them to the departure point for the cruise.

Those planning to visit Arashiyama during the month of December are in for a spectacular treat. Kyoto’s Hanatouro festival is held in Arashiyama in this month.  The festival is held twice a year and Hanatouro means the path with flowers and light. During this time of the month, the streets are spectacularly lit and this is truly a sight to behold. The temples and shrine will all be open and beautifully illuminated during this festival.

The Gio-Ji Temple is a tiny temple located in the north of Arashiyama in the Sagano district of Kyoto. The temple is a Buddhist nunnery which makes it quite different from other temples in Arashiyama. The temple is named after Gio, a  dancer, according to legends. The beautiful mossy garden surrounding the temple and the thatched roof represents the calmness and serenity of Gio, which were said to be her biggest charms. The temple is open from 9 am to 5 pm for visits.

The beautiful Kameyama Koen is located in the district of Arashiyama. The entrance of the Koen is alongside the river. The Koen was visited by Zhou Enlai and to commemorate this event a stone is kept with the words “Arashiyama in the rain” engraved on it. Zhou Enlai was so moved by the beautiful cherry blossoms in blossoms and the greenery of the place that he wrote four poems to commemorate it.

This traditional form of fishing is normally done in the Nagaragawa river but it is also done in the Hozu river of Arashiyama as well. The technique of fishing has been practised for about 1300 years. In this form of fishing, one can see a master fisherman alongside a trained Cormorant on a leash.  The bird swims alongside the fisherman’s boat and captures the fish by diving under the water and swallowing it whole. The captures fishes are kept in a specialized pouch in the Cormorant which is later retrieved by the fisherman who prevents the bird from swallowing the fish by a leash around the bird’s neck. Ukai is done during the summer months.

This unique temple is quite close to the Adashino Nenbutsu Temple and the distance between these two temples is quite short.  The temple was founded by the Empress Shotoku. This temple is famous for its 1,200 stone statues known as “rakan”. The statues represent the disciples of Buddha. The statues were carved by the disciples of the sculptor Kocho Nishimura. The visiting hours for this temple are from 8 am to 5 pm.

Enjoy the streets of Arashiyama through a ride in a rickshaw

Those visiting Arashiyama during the Koyo season are in for a beautiful treat. The autumn colours are quite spectacular. The red coloured leaves of the Maple adorns the street and district and brings about a certain level of calmness to one’s mind. The view is picture-perfect with the evenings reassuring crowds to walk along and take pleasure in the season display

Enjoy the streets of Arashiyama through a walk

Last but certainly not the least, enjoy a peaceful walk along the serene streets of Arashiyama. Take in the view and enjoy the sights that the district has to offer at your own pace. 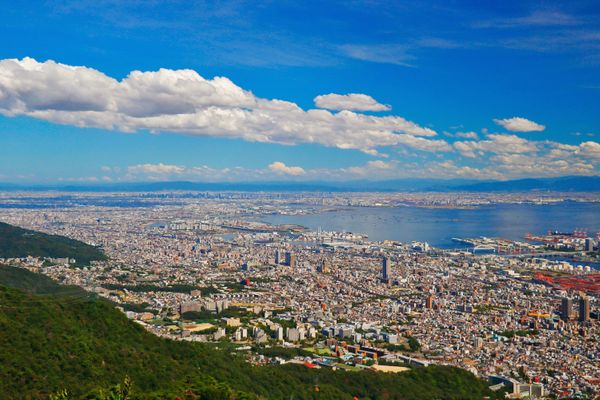 See also: Best Things to Do in Kobe Perched in the middle of Osaka bay and the stunning Rokko mountains is the port city of Kobe, one of the first 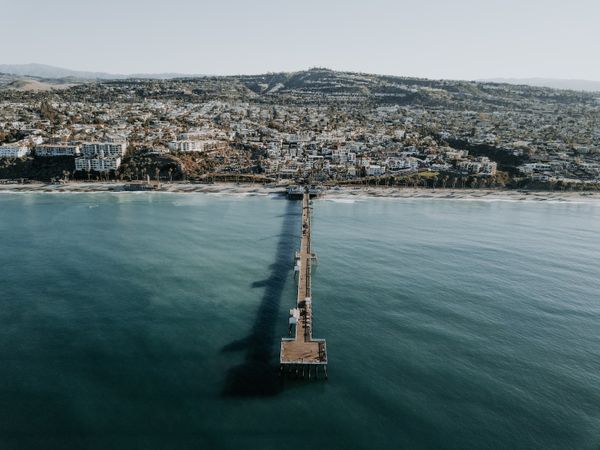 Located just an hour's drive away from the Land of Hollywood, San Clemente is a charming and delightful coastal city in Orange County in the state of California. It is