See also: Best Things to do in Dubai

The capital city of the United Arab Emirates has long been associated with a luxury lifestyle, renowned hotel and resort complexes, and of course, the iconic Burj Khalifa. And Dubai is that, but also so much more. Situated on the Persian Gulf in the heart of the Arabian peninsula, the city's growth story has been nothing short of legendary. Outgrowing its initial purpose of a port city and fishing village, Dubai witnessed concentrated efforts to develop a vast tourism industry, one which mixed with the rich history of the region resulted in the development of one of the world's most eclectic cities.

As it stands today, there are few cities in the world that attract more travellers from across the globe than Dubai. And with the city not being the easiest to navigate through for first time travellers (despite the efficient metro and monorail networks), it becomes important to choose the right neighborhood to stay in. And that is where we like to step in to lend a helping hand. Here, we have listed some of the best neighbourhoods in Dubai and what they might have in store for you!

The central business district of the city, Downtown Dubai has become quite a hub for travellers from all over the world. Downtown Dubai covers a much smaller area of only about 2 square kilometres, which is quite different from its counterparts in other global cities. But do not be fooled by the size of the neighborhood, as this part of Dubai is bound to surprise you with how much a city can fit into such a small space. Not only is Downtown Dubai home to landmarks including the Burj Khalifa and the Musical Fountains, but also one of the most glitzy shopping districts on the planet. Multicultural crowds flood the Dubai Mall, which holds the distinction of being the world's largest. If you find some time to spare from all the shopping, make sure that you visit the underwater zoo and aquarium and have a nice dinner at one of the mall's many artsy restaurants.

Once you are through with that, and of course a view of the city from Burj Khalifa's observation deck, you can always try and explore the other parts of the neighborhood, even on foot. The Sheikh Mohammed bin Rashid Boulevard and Emaar Boulevard are two major thoroughfares that will provide you with endless options in terms of shopping and cafes. The eateries at the two venues are especially impressive as they offer an unmatched mix of cultures and cuisines to choose from. Find your own calling during an afternoon stroll through the areas, while also keeping an eye out for the majestic showroom windows that house some of the world's best high-end fashion brands. Look no further than the lights and music show at the famed Dubai Musical Fountains for the perfect evening at the end of a long day.

The neighborhood is serviceable through the Burj Khalifa or Dubai Mall station on the Red Line of the Dubai Metro. Top names in the hospitality business dominate the area and you will never run out of options in terms of hotels.

One of the most affluent neighborhoods of Dubai, anchored by its residential district and the Jumeirah beach, Dubai Marina is all things that one can expect from a dream vacation spot. Most of the neighborhood's activities that include strolls along the picturesque waterfront walkways, run throughs of the vast shopping districts, water sports including jet skiing  are centered around the man-made marina. The walk, besides offering stunning views of the Dubai Marina skyline, also has a vast number of entertainment options. Outdoor restaurants and cafes, clothing stalls and other stores selling all kinds of merchandise will keep you interested all day. And you can always visit the Dubai Marina Mall, the city's major shopping centre for a whole new experience altogether.

To add to all of that, Dubai Marina has a more laid-back side as well. Lying on the oceanfront are some of the best sandy beach strips that you will find in all of Dubai. The vast white sandy Jumeirah beach is the perfect venue for a relaxed outing. Enjoy a nice sunbath or a quick game of volleyball during the day or visit the nearby water park to keep you cool when mercury feels too much to handle. The many entertainment options at the Jumeirah Beach Residence are the perfect way of spending your evening; you can savour a great meal at one of the many fine dining restaurants or get a quick drink at a nearby bar, among other things to cap off a perfect day in the neighborhood.

Most parts of Dubai Marina are only a short distance away from the eponymous metro station on the Red Line of the Dubai Metro. The neighborhood is also serviceable through the city's tram service. Dubai Marina is home to some of the best luxury hotels in the city, but finding a more affordable option should not be too much trouble either.

Garhoud, a small neighborhood in the northern part of the city is the place to be for sports lovers. Located on the side of the Dubai Creek, Garhoud is home to the famous Dubai Tennis stadium and the venue for the annual men's and women's tennis championships. Pay a visit to the city in time for some of the finest tennis action from across the globe. Even otherwise, Garhoud is a delight for sports enthusiasts, with its many cycling tracks and open spaces with gyms and sporting fields that will keep you coming back for more. One of the best venues to look for a good day of sporting action is the centrally located Al Garhoud Park, which has all the required facilities including sports fields and gyms.

Garhoud is also a great area to stay in with your family. A more laid back vibe makes for the perfect getaway vacation,  away from the bustling crowds of the more mainstream venues. Take a walk around the neighborhood with your family to discover the best eating options which range from fine dining establishments to some of the best middle eastern restaurants and shawarma houses that the city has to offer. The nearby waterfront district of Deira, which is bound by the Persian Gulf and the Dubai Creek on two sides will take you back to the yesteryear glory of the city. The old market streets and port are a great reminder of the city's rich history as a trade centre and fishing village and are a must-visit. While in the neighbourhood, do not miss out on a ride in one of the old wooden ferries (taking you on a trip across the creek) that are open for travellers.

Garhoud is in close proximity to the International Airport, and is well connected to the other parts of the city through the metro network. Multiple stations including Airport Terminals 1 and 3  and the Emirates station of the Dubai Metro pass through Garhoud. The neighborhood, much like others in the city, has a nice range of hotels to choose from.

The western neighborhood of Umm Suqeim is another one of the city's areas that is all things beaches. The main attraction of the largely residential district is the Kite Beach, known for its many sporting activities ranging from paddleboarding to beach volleyball. Surfers and other water sport enthusiasts can be seen flooding the beach complex at all times throughout the year. Families and residents, however, sometimes prefer the Jumeirah beach or the Umm Suqeim beach for a more quaint experience. The neighborhood's many ocean-facing lush green spaces, cycling tracks, and walking trails only add to Umm Suqeim's appeal for the ones seeking a more laid back experience within the otherwise fast-paced city.

Umm Suqeim is one of the older neighborhoods of Dubai and has a rich mix of architecture and cultures that lend it an eclectic vibe. A stroll in and around the area will have you come across every sort of housing establishment, beginning with old fashioned villas, to the modern houses, and even a fww high-rise apartment buildings. Old traditional restaurants continue to thrive even in the face of stiff competition from the more innovative cafes and eateries that have invaded the area in the last few years. The artisanal coffee, skateboarding tracks, causal cafes, nearby arabic bazaars selling merchandise including fragrances and carpets further lend an alternative appeal to the neighborhood. Whatever be your calling, there will never be a dull moment during your time in Umm Suqeim.

The neighborhood is rather centrally located and acts as a bridge between the newer and older parts of Dubai (bound by Jumeirah in the north and Al Sufouh in the South). Umm Suqeim is serviceable by the Dubai Metro at the Noor Bank and First Abu Dhabi Bank stations. Hotels offer a nice range, studying from budget options and stretching on to the luxury resorts such as the Burj Al Arab Jumeirah.

The man made island of Palm Jumeirah is one of the most distinctive features of the city of Dubai, and ever since its inception has become a haven for those in the hospitality business. The oddly-shaped island which was built as a major real estate prospect is now home to some of the most iconic hotels and resorts in Dubai including the renowned Atlantis The Palm. Many of these resorts are dream vacation venues in themselves, with the likes of Atlantis having an endless list of possibilities; entertainment options include shopping districts, water sports, private beaches, amusement parks, picturesque green spaces, oceanfront walkways, aquariums, and a dash of local culture to go along with all of it.

Outside of these resort premises too, Palm Jumeirah has a lot to offer travellers. The nightlife in the area is the most lively in all of Dubai, with many clubs and bars to choose from. What makes these establishments even bigger of an attraction is the location right in the middle of the sea, with sweeping views left, right and centre. The island's options in terms of eateries do not end there as you can find many food trucks serving local cuisine, eclectic diners with fusion meals and other high-end restaurants. The Palm Jumeirah Boardwalk is a popular spot for travellers, especially post sunset as it not only offers great food options, but also the most beautiful views of the city and Atlantis the Palm. A stroll around the 6 metres wide concrete walkway then is the perfect way to spend an evening in the neighborhood.

The island has been made accessible through monorail, with stations at the Palm Jumeirah and the Palm Atlantis. Hotels and beach resorts are not only in plenty in the area, but also some of the best in the city.

Now that you have been through our picks for the best neighbourhoods, all that's left is to start planning your next trip. The eclectic city of Dubai awaits you, traveller! 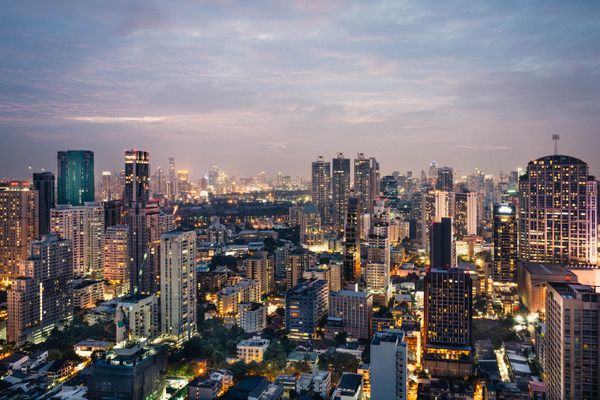 Today, Bangkok is a sprawling metropolis that brims with fascinating historic sites, fashionable hotels, and inconceivable gastronomic adventures. It has turned to be a cosmopolitan shroud and has wiped clean 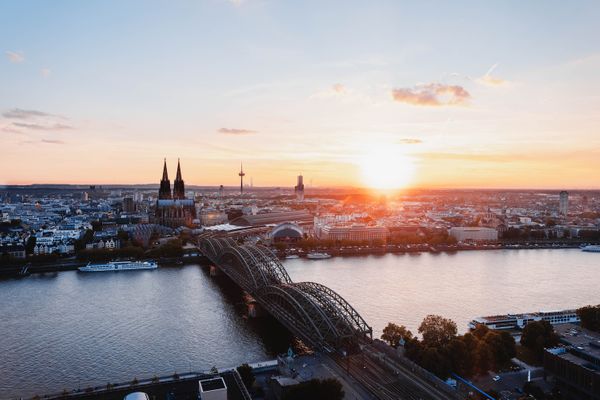 Located on the banks of Germany’s river Rhine, with changing times, Germany’s Cologne is visited by tourists from all over the world. Being home to tourist spots like