See also: Best Things to Do in Taipei

Ximending is fondly referred to, by people as ‘the Harajuku of Taipei’ and ‘the Shibuya of Taipei’. It is tucked away beautifully in the north-eastern part of Taipei’s Wanhua district. It is the place where the country's craziest ideas and skills are concocted to yield the best of fashion, art and subculture. The Ximending pedestrian area is still the largest and the first of Taipei’s pedestrian areas. The streets radiate a vibe that is not a commonplace one. Experience some of the craziest moments of your life as you drop in a handful of weird and fun places.

The Red House should be at the very top of your bucket list if you are in Taipei. The most iconic building of the nation was built in 1908 when Taiwan was still under the clutch of the Japanese. It was listed as a class III historical site in 1997. The western-style, red-bricked, octagonal structure stands out amidst the tall buildings in its vicinity. It started off as Taipei’s first market, but now it has evolved into a platform for the promotion of culture and creativity, entertainment, exhibitions and performances. Step into the octagon if you want to know in-depth, the precious past facts of the place. You will come across clusters of boutiques and stalls that sell affordable handcrafted items and other merchandise. Craftsmen, artisans and DIY freaks must drop by and experience the haven of artists. The structure has a café on the ground floor, so you can refresh yourself amidst explorations. The ambience of the place is further heightened by the bars and restaurants that the structure is enclosed with. The building is quite easy to access as it is within walking distance from the Ximen station.

Ximending is known for being one of the main shopping districts of Taipei. There's a range of stores for everyone here, from high street and designer stores and quirky little boutiques. The area is very popular with tourists and locals and was the first area in Taiwan to become pedestrianised.

Surprisingly, Taipei has an umpteenth number of official areas for street performers and entertainers, the middle of Ximending being one of the busiest. Some of the most undaunting skills are performed here every night. Here is where the talents of the people are let loose. The place never runs out of performers, instead, they queue up one after the other, to show what they have got to the crowd. From vocalists to acrobats to jugglers to hypnotizers, the street platform has all. You must witness a handful of performances here, as they are absolutely free, but if you happen to have some extra cash with you, you can do a good deed by dropping a few notes in the hat, as a way of encouraging the talented individuals.

Tianhou Temple, which is located in Ximending Shopping Complex was built in 1746, with the collective fund donated by immigrant Chinese merchants. The temple, which is dedicated to Mazu, the Sea Goddess, is worshipped mainly by descendants of Southern Chinese and seafarers. It is one of Taiwan’s three major temples that date back to the Qing era, the other two being Bangka Zushih Temple and Bangka Longshan Temple. It is also known as Ximending Mazu Temple. Although it is right in the middle of the bustling neighbourhood of Ximending, the ambience within the temple premises is serene and in harmony with the temple complex. Do not let the not-so-grand entrance deceive you because beyond the often overlooked entrance is a beauty very well hidden.

Cafes are always adorned with pretty ladies and handsome hunks to wait on customers. However, cafes with waitresses dolled up in maid costumes and waiting on you as if you are their master or mistress is not an everyday thing. Taipei is one of the few cities that has cosplay maid cafes, so grab the opportunity and let some pretty lady wait on you as you gorge on your meal or drink. Do not forget to take a picture with your temp gorgeous maid with a Polaroid cam when you are done with your meal/drink, because, why not?

The National Taiwan Museum was originally called the Taiwan Governor Museum and was incorporated in 1908 when the country was under the Japanese colonial rule. The museum has been administered by the Central Government since 1999 and renamed the National Taiwan Museum. It is one of the oldest museums in the country and the only one from the colonial past. The place where it stands today is not its original spot but was shifted to its present spot in 1915. Although it is not as massive as some of the most ancient museums, it is packed with artefacts and narratives of the land’s history, of the flora and fauna of the land. Step into the building if you are eager to know more about the country’s evolution regarding humanitarian development, zoology, botany, etc. The museum houses several paintings that date back centuries. It is at a walkable distance from the Taipei Provincial City God Temple and entrance costs only NTD 30.

This 6-storey shopping centre has all the essentials to lighten up your days in Taiwan. Ximending is often referred to as the source of Taiwan's fashion items. You can browse through clothes, shoes and others that are trending. This shopping complex is famous for its incessant supply of funky sneakers, so if you have a soft spot for those comfy shoes, do drop by here. If you choose to get something fancier, you can do so because the building also has several sections dedicated to imported luxury goods.

‘“The greatest of art dwells not only in museums and galleries”. This statement is clearly proven by the graffiti and murals on the walls of the streets in Taipei. Street art is common in the country, but the vibrant and colourful artwork that the walls of Ximending are adorned with is no joke. You can even spend a whole day wandering through the narrow streets and end up unsatiated. Remember to take pictures of yourself, with the awe-inspiring works in the backdrop, because they are so very instagrammable. Besides the wall art, you will also come across a Godzilla, so artistically made out of trash cans.

Head towards Eslite Spectrum if you desperately need to be teleported to some fictional world. The shelves are heavily laden with a great collection of books. All types of genres are available, with some written in languages such as German, French and others. The bookstore is loyal to everyone and its functioning is curated to be of service to all. Its doors are open 24/7, so you can come according to your convenience, and take your own sweet time, browsing through. Some books are for sale, so if you set your eyes on the latest award-winning book, that you were craving to possess, you know what to do. You can also grab some cool merchandise from the mini-stores.

Night markets are always fun. However, you should be prepared to take some time off your day, if you want to experience a night market, which is on another level. Huaxi is probably one of the craziest, not only in Taiwan but in the whole world, with street stalls selling delicacies made out of exotic creatures, which include snakes, frogs, insects, etc. However, these are only the tip of the iceberg. Delve deeper into the lanes and lose yourself amidst the craziness of the place because opportunities as such do not come often. The easiest way to get to the place is through the Longshan temple station.

Driftwood is all about good drinks and good food in an equally good ambience. It offers over 20 different flavours of local beer and what’s so satisfying about Driftwood is that you can taste samples of the different flavours before you decide on your order. On top of the indigenous crafted beer, they also have an endless supply of imported drinks and fabulous finger foods. The place has a tropical vibe to it, and the interior will surely remind you of Tiki bars and beaches. On some days, the tropical mood is further heightened by live music performances. And hey, they have happy hours too, which means, if you go at a certain time of the day and order 2 drinks, you will be given an extra drink, and will not be charged an extra dime for the 3rd.

2/28 Peace Park, the oldest park in the city of Taipei, is a sanctuary of peace and serenity in an otherwise bustling city. The park was set up to commemorate the National Chinese soldiers, who were massacred on 28th February 1947. The area holds the memorials of the deceased heroic souls. The park area is laid out next to the Presidential Palace of Taiwan. In the north entrance of the park, sits the magnificent building of The National Taiwan Museum, the country's oldest museum. Other than the museum, the park also has a performance area, where every once in a while, outdoor concerts entertain visitors to the park. The park also has a temple in its precincts. Apart from historical and religious structures, the park has ample space where joggers and health-conscious people are often seen working out. So far, the park has been living up to its name. It is indeed a peace park adorned with various pleasing spectacles and creatures, some of which are squirrels, pigeons, turtles, ducks, etc. The park is an ideal place to spend a lazy weekend, for you can come here for a picnic with your family or have some quiet time, with your favourite book. There are a couple of bookstores on the way to the park, so you can grab a few books from the shelves and take them in with you, for some pleasant moments in a fictional world. A part of the park is floored with egg-sized stones, and interestingly, people are often seen walking over it to and fro because they believe that doing so improves the functioning of the organs. There is really no harm in trying, so hop along the path, experience and have your say.

Dine at one of the Modern Toilet branches

Taipei is sure jammed with quirky themed restaurants, some of which are jailhouses, Hello Kitty, aeroplanes, ninjas, hospitals, etc. But a poop themed restaurant is way too crazy. Well, Taipei practices that craziness. They have a chain of restaurants called Modern Toilet and true to its name, the restaurants are all about toilets and their innards. The Flagship branch of the toilet-themed restaurants is in Ximending and has another 12 branches scattered across Taiwan and Hong Kong, with many more coming up in other parts of Asia. These are the eating spaces where sinks became dining tables, toilet seats became chairs, toilet papers are given instead of napkins, soups are served in toilet shaped mugs, ice creams resemble poo and the list goes on. The interior of the Ximending branch is curated as if the whole area is a bathroom. Asian, as well as Italian cuisine, are served here. Make sure to get something, poo related souvenirs, from the mini-store at the entrance, to keep your bizarre experience alive. This place is famous among tourists and young people. It is quite easy to locate as the facade of the building is decorated, most peculiarly with a huge picture of a toilet seat and other relevant pictures. 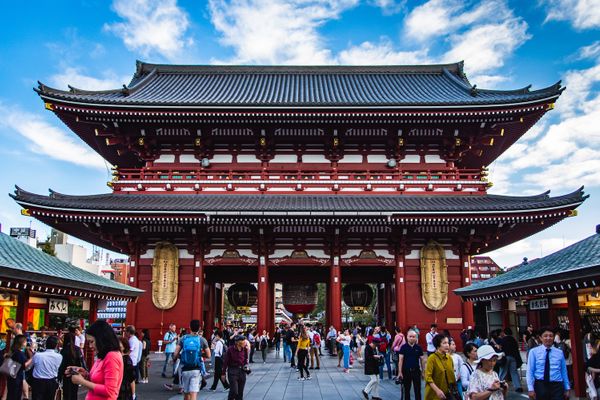 See also: Best Things to Do in Tokyo Replete with attractions, Asakusa is undoubtedly one of Tokyo’s leading districts. Here, you will find everything in one thrilling time wrap. 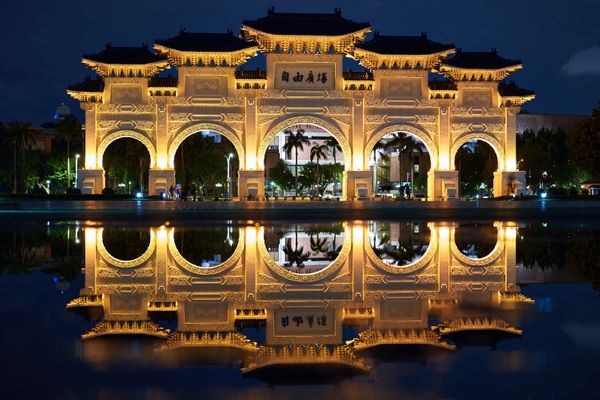 See also: Best Things to Do in Taipei and Where to Stay in Taipei With a Taiwanese blend of primordial traditions and contemporary enjoyment and function, Taipei lures a large