The beautiful city of Canton is located near the middle and west branches of Nimishillen Creek, and was founded in 1805.

It was a heavy manufacturing area, and had many railroad lines, making it an important spot for shipping and transportation.

Today, Canton is one of the prime cities in various areas including education, finance, health service, and other economically important businesses.

For football fans, it is the ultimate city to visit since it is the home of the Pro Football Hall of Fame. Culturally, it is a great place for artists too.

The most important and the first thing to do in Canton is to visit the Hall of Fame. A place where professional American football players who have reached great heights are honored.

It was established in 1963 and pays reverence to many who made it big in the sport of professional football. These include not only players but also the coaches, franchisee owners and other important personnel.

There are 346 members in the Hall of Fame today. Since its inception, approximately four to eight new inductees are taken every year.

Some of the famous names that are honored and enshrined include Alex Karras, Bobby Dillon, George Young and many more. With over 8 million people who have visited this hall of fame since its opening this place is definitely worth a visit whether you are a football fan or not.

A part of the List of United States National Historic Site this historic site is especially important since it focuses on the first ladies of the USA.

Mary Regula, the wife of Ohio congressman Ralph Regula was the first lady who created a board and raised funds, so that they could assemble a biography on all the American first ladies.

This gave birth to the National First Lady's library, which was established in 1996. And this prestigious historic site honors and commemorates all the important First Ladies in the lives of the presidents of the USA.

There are two buildings in whole, including a historic home, and an Education and Research Center.

The Research Center has two floors and on the first floor it houses a theater and a large exhibit alongside a meeting space.

There is also a collection of books, which has been organized according to the First Lady, Abigail Fillmore’s collection, which was seen in the White House library.

On the second floor is the main national first lady's library. There are other floors too that contains other inconsequential rooms like storage and office space.

This historic home is the home of Ida McKinley, who is the wife of the US President William McKinley pre historic in Victorian and theme. It stands tall since its inception in 1841.

The tour guides are costumed and you can take a guided tour through various exhibits related to the President and Mrs. McKinley. The tours are limited, so make sure that you reserve your seats if you are going in a large group of six or more.

In honor of the 25th US President William McKinley, this Presidential Library and Museum looks into the life and career of this famous president.

It is today owned and operated by the Stark County Historical Society. The museum contains some of the largest collections of artifacts belonging to McKinley, and also takes a look at his life and career.

Including right from his birth to his death, which was infamously at the hands of an assassin. The library is also pretty huge and has many books. Other than this, the museum also has a Science Center, which houses various wildlife and fossils.

Do not forget to pay a visit to the Hoover price planetarium built nearby, which was opened in 1963.

It is very beautiful and the dome is quite huge with as many as 60 projectors projecting wondrous scenes from the galaxy including solar and lunar eclipses, life cycles of stars, Aurora Borealis, rainbows and more.

Learn about aviation at the MAPS Air Museum

An acronym for the Military Aviation Preservation Society, the MAPS Air Museum is run by the above stated society. It is located near the Akron-Canton Regional Airport.

It has as many as 50 aircrafts on display, including those from the US Air Force or Navy on loan. These make for really great displays and it's a great museum to visit.

There is also a room called the Gallery of Heroes, where models from war periods are listed.

These include aviation aircrafts that were used during the Pearl Harbor, and many other wars. There is also a library that has various preserved relations including images, literature, manuscripts, diaries, oral histories and others.
It is open to the public and a really interesting place to visit.

Some of the famous aircrafts and display that you should definitely have a look at include the Funk Model B, the Douglas series of aircraft, the Martin Glider and more.

Pay your respects at the William McKinley National memorial

The McKinley National Memorial is to honor the great soul of the 25th President of the United States, William McKinley. It has his final resting place and was built after his assassination in 1901.

It is a pristine and serene area and very important from a historical and cultural point of view.

Canton was chosen as the area to build this memorial because it played a very important role in McKinley’s entire life since he lived and also practiced there for a long, long time as an attorney.

Look at the art pieces at the Canton Museum of Art

This huge museum was established with the prime objective to bring local artists together at a common meeting place and many exhibitions are now held here to promote regional art.

Today an important landmark to display the cultural heritage of Canton including exposure to a greater theme and world of art, and also documentation of all the local arts, and its history.

With as many as 12 to 15 exhibitions held throughout the year, you can find many famous artists, along with regional artists on display.

Other than this the general public can also enjoy an art class or two and other art workshops held here.

Some of the famous artists and display include collections by Thomas Hart Benton, Oscar Bluemner, Robert Rauschenberg, Andy Warhol, and others.

Another area of interest is the area related to contemporary ceramics, where you can find various beautiful and decorative pieces of pottery.

Look at magnificent ships at the Bluewater majesty museum

This museum might be small in size but it is a really impressive museum since it houses a relatively different set of artifacts and displays good and modern ships.

Most of the ships here have been built by Larry Pulca and these are handmade.

The ships are built from really beautiful pieces of wood and exotic species like mahogany, Ebony, and Jatoba.

The ships are very precisely built with an eye to detail and match exact scale to the copies from original blueprints.

This is especially a fun place to visit if you are getting kids along. Since the vintage cars on display are funky and very cool to look at.

The museum was founded in 1978 By Marshall Belden Sr and features as many as 40 preserved classic cars.

Some of the famous models that you can look at here include The 1911 Model T Ford and 1966 Ford Mustang too.

The gift shop is cool too and has many souvenirs to take back home like Games, toys, model cars, merchandise and others.

Take your sweet tooth on a ride at Harry London Candies

An exceptionally famous confectionary store and factory, Harry London candies is one place that you should put on your list if you are a foodie.

These Canton candies are enjoyed by locals and visitors alike since they have the perfect taste.

There are also free tours that you can opt for where you can learn about the history of Harry London. Look at the facility and also watch along as batches of yummy chocolates are made for distribution.

Their handmade gelato is another specialty that we would definitely recommend. At the end of the tour, they also have free samplings of chocolates and caramels.

The Jackson Bog state nature preserve is spread over 50 acres and houses many different plant and animal species.

The boardwalks are very beautifully built and weave their way through quaint and towering trees and shrubs. It is really peaceful to walk here or if you want to get a catch of fresh air alone.

If you love nature, you'll also find a variety of carnivorous plant species, flowering species and other flora. The song Birds keep flying here in there and fill the sky with their melodious tunes.

Established in 1883 by Otto Giessen, the Canton Brewing Company has come a long way and is very important in the history of breweries in Canton since it was the first brewery to open.

It provides a fascinating take on the local beers and a sneak peek into the local brewing history.

It is most famous for its three core beers. They also release seasonal specials that keep rotating every year.

We would definitely recommend that you opt for the guided tour, since you can then enjoy a tour of the brewery and also sample as many as eight beers like the Tiny Tusc Kolsch, the Spiced Saison and others.

Hiking at the Boettler Park

This beautiful park is a wonderful and eclectic mix of wooden trails and concrete walks. What makes it more fun is that they also have a zip line where your kids will definitely have a fun evening. It's not very crowded and airy and spread over a huge space.

The playground is also very well built with swings and slides. They also have pickle ball courts and tennis courts.

It is also a great place to visit if you want to do some low key hiking and trekking among those shrubby trails.

Disc Golf at the Arboretum-Spiker Park

This sport is always fun and the disc golf course here is really well manicured and beautifully built. And then you can also organize a picnic in the vast green space by bagging some sandwiches and cola to take along.

The lakefront is really pretty and a great spot with shade for that perfect picnic.

It is also fur-ball friendly and you can carry your doggo along. What makes the disc golf course perfect is that it is having as many as 27 holes and beginners and intermediates both will enjoy playing here.

What better way to relish a place rather than relishing the dishes and famous cuisines of that place? Canton food tours lets you explore all the different food destinations and breweries and is the best way to honor that foodie in you.

They cater only to large groups, which means a group of six or more. So the more the merrier.

All the stops offer you the best of food and drinks both. You can also ask for customizations in the tour if needed. Other than this, you will also meet experienced tour guides and also other foodies.

With a fishing pond and a playground, it's the perfect end to a family vacation. The pond also has ducks and geese, so your kids will enjoy feeding kids tidbits to them.

The picnic tables are large and well set and you can also have fun playing at the basketball and tennis courts.

There are charcoal grills placed if you're in the mood for some barbecue. The walking path is also nice and cute with trees on either side. 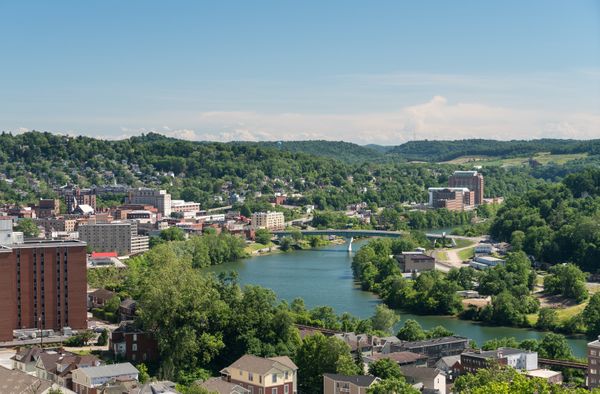 Steve Heap / shutterstock.com If you are into quaint, pretty, and aesthetic small towns- Morgantown should be at the top of your list. This West Virginian town also happens to 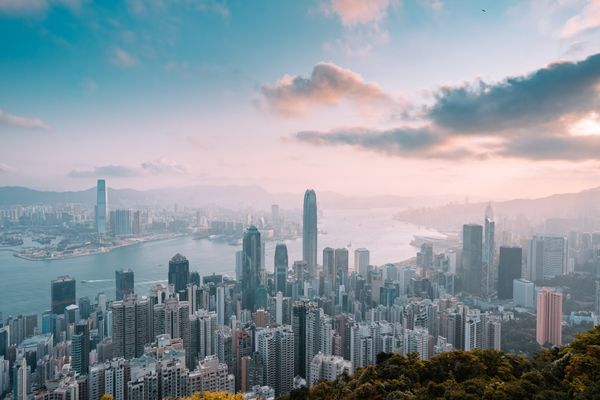 See also: Where to Stay in Hong Kong Hanging electric signs, skyscrapers, a sea of people – Hong Kong has come to be characterized by its visual noise. There is no