Most people often miss out on Gdańsk while visiting Poland. But, this old port city situated along the Baltic Coast can be a visual treat too. Decorated with a rich history, Gdańsk has flourished more over the years. The Old Gdańsk city has been rebuilt to its core and the new one is filled with delicious restaurants, historical monuments, charming museums, and lots of other visual treats that you will love!

Walk along the Royal Way

Lying in between the two massive gates that guard the city, lies the most important horizontal road of Gdańsk. If you want to envision the old town as well as some important monuments on your way there- Royal way or Trakt Królewski is a short cut to do all these.

Did you know the history of Royal Way dates back to almost 1437? This road got its back when Casimir IV Jagiellon (the then King of Poland) came to visit Gdańsk. Back in that time, royalty used to pass along this road so walking along the Royal Way gives off some royal vibes too!

The entire length of the street is almost 500 meters, and half of which falls through the main street of Gdańsk- Ulica Długa. It also happens to be the most mesmerizing street of Gdańsk. Don’t forget to take plenty of photos for your Instagram as the spot is extremely picturesque along with some pretty spots too.

Take a snap of the Neptune’s Fountain

Neptune’s Fountain is one of the most iconic places of Gdańsk. It will lie on your route as you walk along the Royal Way. Abraham van den Blocke built this icon back in 1615, and it has been standing strong since then. When the Royalty came to visit the city, they stayed in luxurious cottages or townhouses that showed them a view of this Neptune’s Fountain. It is said that the bowed head of Neptune is a result of showing them respect.

The statue is beautifully decorated with several ornaments such as cherubs and fishes. The entire piece of art is made of bronze and is quite hard toms when you are walking along the street.

This is an important place concerning Gdańsk’s history. Situated in the dock area along with the Solidarity Monument, European Solidarity Chamber plays an important character. If you are not well aware of the history, you can easily take a look inside the Solidarity Chamber as it contains all the substance. The main part is that Lech Wałęsa agreed to the Solidarnośc Trade Union movement by signing the treaty right in this place back in 1980. The place is quite informative and will surely fill you with a lot of unknown facts.

Wander around the beauty of St. Mary’s Basilica

A massive Gothic architecture that dates back to almost the 14th century- St. Mary’s Basilica is not something that should be missed. It is so big that it ranks in the top three churches made by brick in the entire world. If you still are not convinced- it can presumably hold almost 25,000 people during the worship session! But, it was almost destroyed in the aftermath of WWII. To this day, some of the most valuables remain unaltered- a stone pietà of Gothic design still stands from the 15th century and a clock that was established back in 1460, can be still seen.

You have to climb a lot of stairs if you want to visit the main monolithic tower. You will be rewarded with the best views of Gdańsk city. Do click a lot of photos of both the interior as well as the exterior of the infamous church.

Relive the old terror at Westerplatte

Now we set foot in the part of Gdańsk that reeks of WWII. The League of Nations placed a group of Polish Military here. The Germans saw these helpless soldiers as an easy way. They were not left with enough supplies and they did not have any possible way out of that hell-hole. After going through the terror for almost a week, they were left with no other option than to give up.

Fast forward to the present day, the Westerplatte peninsula has been restructured with a museum that contains the heroic tales of the war heroes. You can still see some ruins that are still there right in their places.

St. Mary’s Basilica is not the only memorable Church of Gdańsk. Oliwa Cathedral is a breath-taking beautiful structure that is entirely made up of marble. At an isolated place located almost 10 kilometers away from the old town of Gdańsk, Oliwa was built back in the 14th century like St. Mary’s Basilica. They are the finest examples of Baroque art. You cannot find this style anywhere else. If you make your way to the church in the middle of one of their recitals, you will get to understand how truly heavenly the feeling is.

Buy a gift at the Amber Museum

Gdańsk has a rich history related to ambers. If you want to gift someone something truly unique- a souvenir from the great Amber Museum might be great. The Baltic Coast is well known for its rich amber deposits and they improve the city’s economy to a large extent.

The museum that is solely dedicated to paying respect to this is a sight to be treasured indeed. The art resembles that of the 16th-18th century and will blow your minds away. The museum is a nice blend of both modern and ancient pieces of art and is one of the best things to do in Gdańsk.

You are the luckiest person if you get to visit Gdańsk during the summers. The streets are the liveliest at this time. They are all lit up. There are several stalls set up on both sides of the road. The atmosphere is too good to be true. The music goes on all night. Every element makes St. Dominic’s Fair quite unique and it is something you cannot forget so easily.

It is held almost throughout Gdańsk, but the main attraction is in the city center with the festivities being the maximum at that part. You can find a lot of delicacies in the food stalls that are set up across the streets. This festival is a great way to feel in touch with the locals.

Walk on the sand at Jelitkowo Beach

If you are done with all the sightseeing of Gdańsk, Jelitkowo Beach is an amazing place to breathe in views of the Baltic Coast. Once you reach the place, you will realize what the hype was all about.

The beach-line is smooth with heaps of sand and the sea waves washing up at your feet. You can take a walk along the sandy shore to rejuvenate your soul. However, even if you want to feel how it feels cycling against the sea breeze- you can do that here too! There is a path just for cycling. There are ample parks and trampolines for your kids to play if they get bored!

To pay respects to the soldiers who fought for freedom till their last breath, the Museum of the Second World War has been constructed. This is one of the newest additions to the city’s endless museums and architecture. Being set up in 2017, it has become one of the best places to see in Gdańsk.

Families came up and donated stuff to the museum that was left by their predecessors who gave their lives away in the terrible war. The beauty of this museum is so nostalgic that one can only feel it. It cannot be described in words as the charm is beyond sentences.

Be amazed by the Town Hall interiors

The Town Hall is one of the Gdańsk structures that have an amazing location and is something that can be spotted without any difficulty. However, what’s truly amazing is the interiors. A couple of architects from Denmark designed and built this hall. You might not notice it at first glance, but if you bend your head enough you will be able to catch a glimpse of the structure of Sigismund II Augustus at the top of the Town Hall. He was the then monarch during the 26th century when the tower was built. When you step foot inside, you will be able to experience a history museum that is of great significance. It is maintained by that too.

Take a glimpse of the Golden House

The Golden House might be the most alluring piece of art in all of Gdańsk. Situated in the Long Market area, quite close to Artus Court- stands the Golden House tall enough for people to look at it and at least take two or three snaps.
It is a combination of beautiful gold and white. The house was specially constructed for Jan Speyman who also happened to be Gdańsk’s mayor back in the 17th century. It is an incredible structure that deserves our attention and compliments. There are several engravings of historical figures and figurines which makes the structure all the more interesting.

Gaze at the Gdańsk Crane

Gdańsk Crane is an incredibly large piece of machinery as well as an icon of the city of Gdańsk. It is located along the banks of the Motlawa river where the Long Embankment lies too. The crane is not a new structure either for it has been there for ages since the Hanseatic League. But, it is not used right now and stands as a tourist spot where people stand and take pictures for their social media.
It was once used to lift up heavy objects from the river. It was not a piece of automatic machinery but was operated by men. Groups of men worked on its wheel as it pulled up objects weight a few tonnes.

It was used by the people of the town till the 19th century. Now, the national museum has taken over which helps in maintaining the crane for the tourists.

The Royal Way is not the only beautiful street in the heart of Gdańsk. St. Mary’s Street is equally pretty as a picture. Its official name is Mariacka Street. Have a lovely stroll around the street and make sure to check out the different shops as you might be able to find a lot of gifts. There are also a lot of stalls around and quaint cafes if you want to sit down and have a drink. It is a cobblestoned street so it is bound to give you that ancient Europe feels.

While walking along the Royal Way, you will get to see the Long Market or Dluga Targ. It is an infamous market of Gdańsk that is just lovely to look at and explore. However, it is a pedestrian-friendly road and they do not allow cars now. If you want to go on a lovely evening stroll, eat something or buy some gift- Long Market is the ideal place.

This brings us to the end of our lovely Gdańsk trip. There are a lot of other places to check out in Gdańsk. But, if you want to head over there for a weekend getaway, then you must try to cross off these 15 things to do from your list! Let us know if we have missed out on anything. 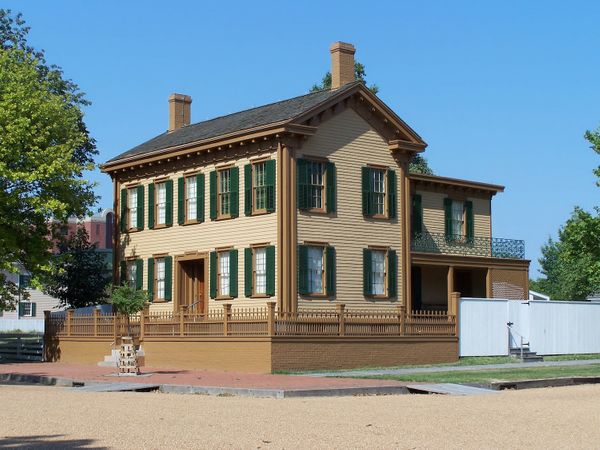 Illinois is quite well known for its major tourist attraction- Chicago. But, the capital city- Springfield is no less of a surprise! All my history geeks know what I’m 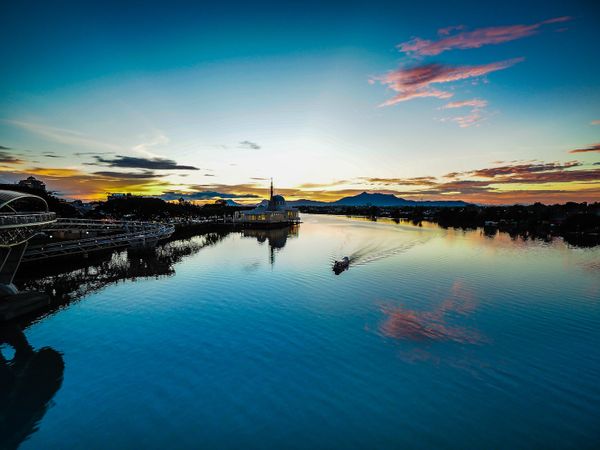 Kuching city, capital of Sarawak, home to the Serpentine Sarawak River running through the city and one of the unique national parks that blooms world's largest flower throughout year. It