See also: Best Things to Do in Perth

There are very few places in the world that will give you the chance to enjoy the delights of serene beaches, a stunning riverfront, a sprawling urban cityscape with historic enclaves all without ever having to leave the city bounds. The capital centre of West Australia, Perth is one such venue. The central business districts of the city (centered around the meandering Swan River) are as cosmopolitan as they get, while the outer suburbs offer a slew of opportunities including beach days and tours of the colonial cityscape.

The city's central quarters are rather compact and well connected through wide avenues, making travel rather hassle free. Public transport undertakings also connect the suburbs to the city centre, thus leaving no nook or cranny of Perth inaccessible. All of that just widens your list of options to choose from in terms of accommodation for your stay. But we will give you a headstart on things. Here, we have listed some of the best neighbourhoods of Perth and what they might have in store for you traveller!

A quintessential Australian city centre, Perth's Central Business District is a cosmopolitan neighborhood with a sprawling skyline and a lively atmosphere. It sits atop the Swan River and is home to some of the city's most renowned landmarks including the Bell Tower, the Perth Cultural Centre and His Majesty's Theatre. Simply put, it is the place to stay in if you are looking for sightseeing tours and exploring the city's rich history. Start from a tour of the Cultural Centre, which is a composite of smaller museums and theatres that showcase everything ranging from the aboriginal culture to local theatre to contemporary art of the city. You can then head over to other such historic landmarks as the Perth Mint or the Barracks Arch among others.

The area surrounding the Bell Tower has a few waterfront restaurants that are great stop-overs in the middle of the day. The real hub for activity in the city, however, is the Murray Street. The street is lined with shopping malls and plazas, some of Perth's best restaurants and even some great independent art galleries. The modern cityscape here really complements the abundance of landmarks or great sights well, and lends a sense of dynamism to the city centre that has become synonymous with Perth. The carefree shoppers on the streets, the local artists on display in the huge windows of the galleries and the diverse crowds here are what really make Perth a truly cosmopolitan city after all.

As the central business district of the city, this neighborhood is by far the easiest to access through all means of transportation. You will also have absolutely no problem finding a good hotel in the vicinity. As an aside, make sure you visit the observation deck of the Bell Tower for sweeping views of the city's modern skyline.

Now if you are looking to acquaint yourself with the rich history and heritage of the city, the seaside neighborhood of Fremantle is the place for you. The sprawling historic quarters of the neighborhood are sure to transport you to another era altogether. The British colonial architecture dominates the cityscape as they used this part of the town as the city centre upon their arrival in Perth. The Victorian buildings accentuated by the majestic Fremantle prison are a sight to behold; most of them have been converted into museums and information centres open for interactive tours. Make sure you pay a visit to the Roundhouse prison, the city hall and the University of Notre Dame Australia beside the Fremantle Prison.

The arrival of the British also set in motion Perth's long and eventful maritime history. And as it stands today, Fremantle has one of the most well preserved museums and exhibition halls showcasing the same. The West Australian Maritime Museum is one of the best establishments in all of Perth; not only do you get to marvel at the historic vessels and maritime exhibits, but also get to be a part of a submarine tour! And while you're here, take a walk towards the pier until you arrive at the iconic South Mole Lighthouse, which doubles as a quaint viewing spot. The Shipwreck Museum and the E Shed open air market are other great establishments in Fremantle. Talking of which, the sandy Bather's beach has a wide range of restaurants and cafes and is a great place for a family outing.

Fremantle is about a 30 minute ride from the Perth Airport and about the same distance from the city centre. Hotels are in plenty, but they can be on the pricier side compared to some other parts of the city.

As for the other seaside neighborhood in Perth, Cottesloe is the place where you should head for all things beaches. Situated north of Swan River right across from Fremantle, this part of town is much quieter and outdoorsy than the other overtly urban centres. The main draw of the neighborhood is the eponymous Cottesloe beach, a rather long strip of white sand that is the perfect venue for a long day of sunbathing. The turquoise water surrounding the beach is also great for swimming; and for the explorer within you, local service providers also offer diving and snorkeling excursions on site.

The beachfront is marked by the Marine Parade, a stretch of road dotted with numerous cafes, casual eateries and seafood shacks. You will find a varied range of cuisine here, but the pizzerias and the establishments serving local seafood should be on the top of your lists. The lively pubs also host live music and open mic performances during the evening, so make sure you find a spot well in advance. Away from the bustling beaches, the Napoleon Street offers you a boho vibe market street, with many quirky eateries and home-grown businesses selling varied produce including designers swimwear, jewellery and souvenirs.

The eponymous Cottesloe and Grant Street stations of the Transperth Trains make the neighborhood fairly straightforward to access. It is still a little farther out than the more central districts, but offers great accomodation options with fine resorts and upscale boutique hotels.

The chic riverfront neighborhood of East Perth is perhaps the best place for a laid-back vacation within the city centre. The bank of the Swan River are lush and have walking trails and cycling tracks running parallel to it; if you do choose to get a place close to the neighborhood, you can go out for morning walks or simply take your bike for a refreshing ride in the middle of the day without ever having to worry about leaving the city bounds. The lush waterfront Ozone Reserve and Langley Park as well as the inland Wellington Square and Queen's Gardens only further this relaxed vibe that has come to become synonymous with East Perth.

East Perth is also one of the best neighbourhoods for food enthusiasts as this compact space will give you a surprising amount of top restaurants to choose from. While the main thoroughfares of Adelaide Terrace and Plain Street have a handful of great cafes and trendy bars, the northern end surrounding the Claisebrook Cove is home to some of the city's best waterfront restaurants. You can enjoy a dinner at one of these stunning locations or go for a stroll along the broad-walk. The area is even more visceral in the night, with the neon lighting of the cages and around the streets only adding to the appeal.

Both of the Perth CBD's major avenues, the Adelaide Terrace and Wellington Street run through the city centre into East Perth making the commute hassle free. A majority of the neighborhood's hotels are also concentrated around the former, but can always look for a nice waterfront accommodation.

The neighborhood across the Swan River from the city centre, commonly referred to as South Perth is the top choice amongst families. The lush, otherwise residential neighborhood has attracted the crowds to its many popular family oriented entertainment options. At the top of that list is the Perth Zoo; not only is this vast zoo a great place to discover Australian Wildlife, it also offers quaint picnic spots and open green spaces for small get togethers. There are fewer places in the city better suited for family outings. At a stone's throw from the zoo are the Old Mill theatre, staging local productions, a nice outdoor cafe and a small beach doubling up as a sunset viewing point.

The Old Mill, a 19th century landmark has been beautifully restored and now serves as a landmark for this part of the city. Today, you can even avail guided tours of the vicinity here, pay a visit to the local education centre and buy souvenirs to take back home from the complex here. The windmill stands very close to the Narrows Bridge, which connects the northern and the southern parts of Perth. Green spaces surround the area and serve as photography hotspots, especially during the night. You can hire a jet ski or go for a boat ride of the Swan River from local service providers at the nearby South Perth Boat Ramp. Or even better so, hail a seaplane that offers aerial tours from the Swan River Seaplanes window at the South Perth Esplanade.

Like mentioned before, the Narrows Bridge is one of the main connections between North and South Perth. Ferries and jetties too, however, run across the Swan River and are a convenient way to avoid city traffic.

The up-and-coming entertainment districts of Burswood make it one of most exciting parts of the city to base yourself in during your stay. This riverfront neighborhood has everything that you need for an adrenaline pumping week. At the centre of all activities is the mixed use space Crown Casino Perth, which is home to several tip diners and eateries, outdoor pools and of course a giant casino! There's also a few live concert venues and open-air theatres in the bustling complex that host local musicians, artists and stand-up comedians for late evening and overnight shows that draw in huge crowds.

Burswood is also the best place to enjoy Perth nightlife outside of the convention city centre. Several waterfront pubs and trendy bars have sprung up in the neighborhood in recent years, lending it a sense of dynamism that can be felt even during the late hours. One of the cities biggest sports and live concert venues, the Sleek Perth Stadium is also in the vicinity of Burswood, also making it a top choice for sports fans. The open air gyms in the neighborhood's vast green spaces and cycling tracks next to the Swan river offer a nice change of scenery and really round up the appeal of Burwood as a complete vacation experience in itself.

Hotels and resorts in Burswood are some of finest in all of Perth. There's also a wide range of new and inexpensive accommodation options to choose from. The neighborhood is also one of the closest to the Perth Airport so accessibility should not be an issue either.

That's our list for the best neighborhoods to stay in at Australian Western gem; take your pick and get packing. Until next time, traveller!

Friedrichshafen is a city of global character and affable simplicity. This trade fair downtown boasts of an opportune location- it is situated directly on the shores of Lake Constance. Founded 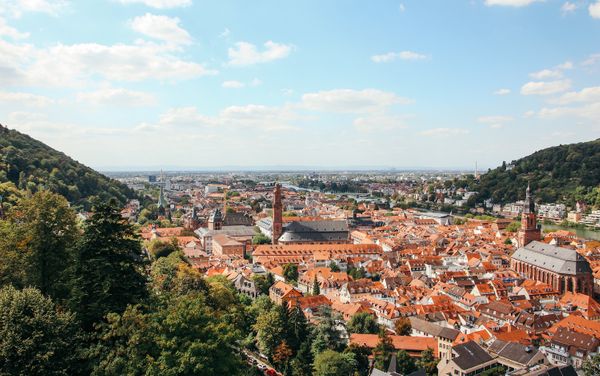 One of the most sought after tourist destinations, Heidelberg needs little or no introduction. From being a historic university town to being a cult favourite when it comes to its