Quite different from the general idea of a Japanese metropolitan city, Nagoya is a unique experience altogether. Located on the Pacific coast of Honshu Island, Nagoya is one of those urban cities that has managed to stay in touch with its natural side. The green spaces, nature parks and wetland centres of Nagoya attract as many global travellers as the city's central business and entertainment districts. The city's rich history and culture breathes through its large castle complexes, ruins of erstwhile palaces, and even the most ordinary-looking ramen shops.

The city has been divided into 16 wards, with each of them having its own unique vibe. Travelling has been made hassle free with the extensive subway network, leaving no part of the city inaccessible. It then becomes important to pick the right place for your ideal stay in the city. But leave that job to us. Here we have listed some of the best neighborhoods of Nagoya and what they might have in store for you!

The central administrative district of Naka-ku is also where Nagoya is at its glittering best. A skyline characterised by high-rise buildings, huge malls and the Sky Boat Ferris wheel, the heart of the district lies with the Sakae neighborhood. The distinctive noodle bars and izakayas (Japanese pubs) make the neighborhood a paradise for the lovers of the gourmet world, with the vast neon-lit shopping districts adding much life to the already lively part of the city. The pedestrian markets of Sakae are always bustling with activity, as are the restaurants and ramen bars and with the presence of many western pubs (to go with the izakayas) you will never find a dull moment, even late into the night.

Poles apart from Sakae is the southern shopping district of Osu, which is more distinctly Japanese, with its handicraft stores and Buddhist temples lining up the paved alleyways. The neighborhood is best explored on foot as you are bound to come across beautiful temples and shrines at every corner. The most notable of these is the eponymous  Ōsu Kannon temple, where worshipers can tie their wishes written on a paper next to the temple's famed red lantern. The shopping district sprawls over a large area with local handicrafts and antique stores dominating the scenery. The neighborhood hosts a shopping festival on the 18th of every month, making it the best time to visit the market. Osu is also popular with the younger Japanese crowd owing to the presence of several fusion restaurants and bars serving locally made craft beer.

Naka-ku is the best place for luxury stays as one can find many high-end boutique hotels and big names of the hospitality business in the neighborhood. That said, budget hotels and homestays are also easily available in the central district. Centrally located, the neighborhood is serviceable through almost all modes of public transportation. As many as four lines of the Nagoya Municipal Subway pass through Naka-ku.

Although still technically a part of Naka-ku, the area around Nagoya Castle in the northernmost part of the ward has its own unique vibe. The 17th century castle complex, which anchors the neighborhood is a majestic example of Edo period architecture and standing in the middle of the vast cherry blossom orchards and green spaces offers a picturesque setting. Shinto shrines including the Aichi Prefecture Gokoku and Nagoya shrines, other smaller palaces like the Hommaru palace and Nagoya Tenshu, and other subsidiaries surround the large Nagoya Castle complex and will keep you interested all day long.

Besides all of that, the northern part of Naka-ku is also home to some of the most iconic landmarks of the city including the Hisaya Odori Park, Nagoya's own version of New York's Central Park. Situated here is the Nagoya TV Tower, the oldest TV tower in the city known for its brightly lit facade and the restaurant and bowling alley at the top floor. Besides that, the Hisaya Odori Park has many miniature waterfalls and water fountains, modern art exhibits and orchid gardens that will make you want to spend your entire day in the vicinity. Just south of Hisaya Odori is the Central Park, which has an underground marketplace that is often frequented by visitors.

The area around the Hisaya Odori Park, almost sandwiched between the Nagoya Castle complex and Sakae has a number of hotels and staying options to choose form. You can also find a few luxury hotels closer to the Castle Complex.

The port district of Nagoya, Minato-ku covers the waterfront of the city in almost all its entirety. Needless to say, the view from any and all parts of the neighborhood is nothing short of breathtaking. It helps that Minato-ku has a number of green parks and walking trails right at the waterfront that become perfect venues for morning jogs and leisurely evening strolls. The best of the parks are the Nagoya Port Bluebonnet Wildflower Garden on the island sub district of Shiomi-cho and the green space around the Ramsar Wetland further westward. The latter also has several sporting grounds including a soccer and a baseball field, a birdwatching centre and a wetland centre spread over a large area. There are few spots in Nagoya that have a better view of sunset, so make sure you visit the park just in time for that.

Other major attractions in Minato-ku include the Legoland Amusement park, which other than having eponymous theme rides also has a miniature model town featuring major Japanese attractions including the Nagoya Castle and Tokyo station. The green parks around the harbour area are another location with stunning views of the Nagoya waterfront. Besides, the Maritime Museum, the Port of Nagoya Public Aquarium and to top it all, the Nagoya Port Building's Observation Deck are also must visit spots. Also not far off is the Nagoya Port Sea Train Land and its accompanying leisure park. The Ferris Wheel at the venue will also give you a chance to get sweeping views of the entire city in one go.

Finding a hotel should not be particularly difficult in the waterfront district, but the ones at a certain distance from the port might be a better pick here. The Meikō Line of the Nagoya Municipal Subway makes is easy to travel around the neighborhood with stations at Tokai-dori and Nagoyako among others.

One of the oldest wards of Nagoya, Higashi-ku was rebuilt after the Second World War as a planned neighborhood and has developed into a business district of sorts. Large shopping and entertainment centres now dominate the landscape, drawing large crowds throughout the year. The Midland Building, besides being the tallest buildings in the city, is also home to one of the highest observation decks in Japan, a large shopping arcade, and a movie theatre. The other major entertainment venue is the underground facility (that also doubles as a bus station) of Oasis 21, which again has a huge array of shopping options, cafes and take-out restaurants.

Despite the large urbane landscape, Higashi-ku has done exceptionally well to preserve and promote the rich history of the city. Other than the many Shinto shrines and Buddhist temples that are interspersed all over the neighborhood, Higashi-ku is also known for the Cultural Path, a large extended area housing many historically significant buildings. Best recognised amongst those are the wooden buildings including the Buddhist temple of Kenchū-ji and the Toyoda and Sadayakko Kawakami Houses. And at the Eastern end of the Cultural Path is the Tokugawa Garden and the accompanying Tokugawa Art Museum. The garden in itself has a small pond that is surrounded by seasonal flowers and peach trees making for a picturesque setting. And the Museum has a wide range of exhibits ranging from those of Japanese armour suits to Chinese calligraphy.

The neighborhood is serviceable through multiple Nagoya Municipal Subway lines including the Higashiyama Line, Sakura-dori Line, and Meijo Line. Higashi-ku's status as a corporate neighborhood has attracted even the biggest names in the hospitality business, but finding a more commonplace hotel should be just as easy.

Onto the more laid back parts of the city, then! Nishi-ku is the northwestern ward of Nagoya and is best suited for family vacations owing to its quaint and village-like vibe. The neighborhood is dissected into two parts by the Shonai River, which also makes for the many picturesque settings of the Nishi-ku. Vast elongated green spaces and parks run along the river banks on both sides and are perfect for cycling enthusiasts and those of you who cherish an evening leisure walk. A few majestic bridges connect the two sides of the neighborhood. The northern end of the Shonaigawa Bridge opens into the Shonai Ryokuchi Park, a popular picnic spot for families and sporting activities including baseball and lawn tennis. The park's beauty is further elevated by the presence of cherry blossoms and small ponds and rivulets.

The extreme southern end of Nishi-ku is home to the Shikemichi Historical Village, which was once a hub for the city's merchants. Designated a protected heritage site, the area has attracted many travellers with its old worldly charm. Many locals have since opened cafes and bistros around the area to cater to the increasing number of visitors and as it stands today, the neighborhood has an endless list of eateries to choose from. The yesteryear charm bleeds into the architecture of the houses and the picturesque bridges built over the Hori canal. Be it the distinctive Nagoya altars, or the Yanegami (rooftop shrines) on the first floor of residential buildings, or the golden knobs of the reconstructed Gojo bridge, everything about this part of the town celebrates its rich history.

The Tsurumai Line of the Nagoya Municipal Subway runs through the neighborhood, making it easily accessible from the other wards. Hotels and staying options are in plenty, especially in the southern part of Nishi-ku. The neighbourhood is said to be the original home to the now famed pachinko arcade games and finding the odd game parlour in this part of the town should also be easy.

Chikusa-ku is one of the larger wards of Nagoyako, tucked away into the northeastern corner of the city. The neighborhood has long attracted travellers to its huge botanical gardens and summer festivals, but its appeal has grown over the years, especially amongst the younger crowd. More on that a little later! First up, the Higashiyama Zoo and Botanical gardens. One of the largest animal and plant centres in Asia, the venue is spread over a huge area in the southeastern part of Chikusa-ku and offers, at a modest fee, a great getaway outing in the middle of a metropolitan city. Lush green with intermittent ponds, rare plants exhibits and open green spaces, the occasional take-out cafes and ramen shops, Higashiyama has everything you need to refresh yourself from the busy weekend in the city.

Chikusa-ku also hosts the summer festivals that attract both local and international crowds around the Shinto shrine of Shiroyama Hachimangū and the ruins of the erstwhile Sengoku stronghold, the Suemori Castle. Add a few Buddhist temples to that list and you have an eclectic mix of cultures in the neighborhood.  The neighborhood has also seen an increase in the number of casual diners and book cafes, and clubs and bars with live music performances in recent years. The same has been a major draw for the younger crowds, who can now be seen flooding Chikusa-ku, which was once a majorly residential district.

So that's all from our side. Take your pick, get the bookings and get going with your next trip to the city of peace, traveller! 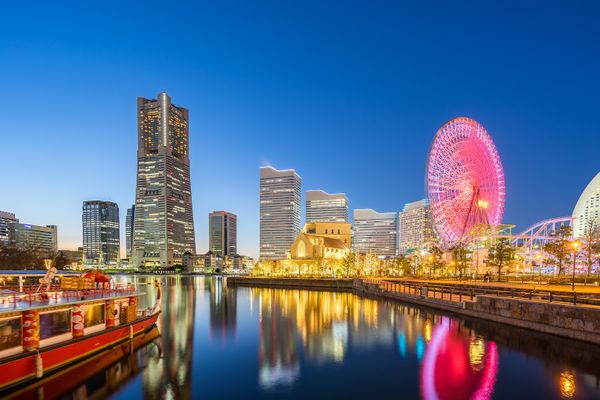 The development of Yokohama as one of Japan's major port cities has been well documented, and for good reason! The area has shed its past of a humble fishing village 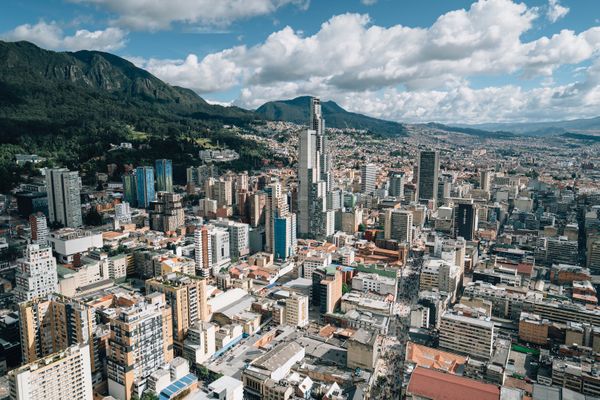 Bogota is a lovely South American city with a rich cultural history and a diverse population. Being the capital of Colombia, this lively city has lots of places to explore