The capital city of China's Sichuan province, Chengdu, is a getaway vacation spot in the truest sense. Be it the laid back lifestyle that has become a distinctive feature of the city or the tranquil vibe of the lush mountainous countryside, Chengdu has all the makings of a dreamy vacation. One where you will not always find yourself amidst a bustling crowd of neon-lit entertainment districts, but rather unconventional and alternative settings that are deeply rooted in the city's rich culture and history.

Chengdu's rich past lives on through the many historic sites, cultural enclaves and streets, the city's famed gastronomy and of course, it's people. You will never find yourself at a loss of things to do while in the city bounds. Travelling has been made hassle free through the extensive road network and the ever growing Chengdu Metro. The efficient transport system has made every nook and cranny of the city easily accessible and it just widens your options in terms of choosing a neighborhood for your stay. And that is precisely what we would love to help with. Here, we have listed some of the best neighbourhoods of Chengdu and what they might have in store for you, traveller!

The central part of the city is anchored by the iconic Tianfu square, located in the Luomashi neighborhood of the Qingtian district. The neighborhood is the best place to choose for your lodging if you want to stay connected to the other parts of the city as travel is easiest via the Tinafu Metro Station. The square has become a popular meeting point and the central fountains are the perfect place to start your day's exploration from. Sightseeing is a popular activity in the neighborhood as you have some of the best mosques and monasteries of Chengdu in the vicinity. The city's largest mosque Huangcheng Mosque, the Buddhist shrine, Wenshu Yuan Monastery and the Taoist palace, Qingyang Palace are all among the must-visit spots.

Take a quick trip to the Kuanzhai Xiangzhi or the Wide Alley, Narrow Alley for the quintessential Chengdu experience. The cultural enclave, housed in the Qing period alleys of the city, is a microcosm of sorts. Native culture, art, and gastronomy comes alive in these narrow alleys and you can find the best local restaurants and eateries, souvenir shops, and  courtyard houses lined up one after the other. The picturesque neighborhood is bound to take you on a journey through the city's glorious past. And if that's something you enjoy, visit some of the nearby venues including the Chengdu Museum and the Sichuan Science and Technology Museum for more on the city's journey through the times.

Hotels are in plenty and amongst the finest that Chengdu has to offer and Luomashi's major traffic hub is the Tianfu Metro station. Visit the plaza in evening for the neon lit fountains in the backdrop of the city's skyline.

A little westward in the Qingtian district lies the quaint neighborhood of Qintai. The area is lined with historic sites all lit up beautifully in sombre lights during the evening, the time when the area comes to life. The pedestrian only street, lined up with traditional houses from the Qing and Ming periods, teahouses and restaurants, and majestic gates and opera houses, is the place to be if you wish to stay away from the bustling parts of the city. The legend of a love story between a wealthy widow and a destitute scholarly man loom large over the Qintai street and only add to the mystical appeal of the area. The Shufeng Yayun Opera House and the Splurge restaurant should definitely be on your list of venues to check out if you're around Qintai street.

The neighborhood lies close to the bank of the Jinjiang river and offers lovely walking trails that run alongside the waterfront. Enjoy a nice stroll as you try and find your way around the neighborhood's many landmarks. The Culture Park or the Wen Hua Gong Yuan is the perfect venue to enjoy an afternoon tea. Marvel at the many native cultural exhibits at the theme park, the most impressive of which are the Pavilion of the Eight Trigrams, the Great Art Relief Wall and the Zhiji Stone. The park is a stone's throw from the famous Taoism temple, Qingyang Palace and the Tang dynasty poet's commemorative museum, Dufu’s Thatched Cottage. The laid back vibe of the entire neighborhood is what makes it resemble the actual Chengdu lifestyle the most closely.

The neighborhood is serviceable through Line 2 of the Chengdu Metro at the Qingyang Palace station. Qitai Road has some of the city's best luxury boutique hotels in its vicinity, but finding more affordable options, especially in areas just north of the neighborhood, should be equally easy.

The Jinjiang district more or less rounds up the downtown part of the city. And despite being a central business district, it has a more tranquil side to it as well. The area around the waterfront is lined with walking trails and cycling tracks and will soon have its own wetland facility. Take a ride along these on a rented bicycle for a truly refreshing experience  The area is lined with trees and green pastures, which not only improve your morning walk experience, but also offer great spots for small get togethers and picnics. The Jinjiang river is intersected with many majestic bridges, the most iconic of which is the Anshun Bridge. The landmark has been transformed into a high-end restaurant frequented by the residents of the neighborhood. Visit in the evening to catch the view of the bridge's beautifully lit facade.

And then there's the glitzy side of Jinjiang, that has long attracted people to its vast shopping districts and famed nightlife. The Chun Xi Lu Street is one of the liveliest parts of the city with crowds thronging the branded clothing stores, designer boutiques, top restaurants, and artsy cafes at all times during the day. The nearby malls and recreational centres in the district are just as appealing. The Sino-Ocean Taikoo Li centre is amongst the finest and offers an eclectic mix of sites of historic and cultural importance and modern entertainment options such as open air malls. In short, you can have a true shop till you drop experience during your stay in Jinjiang. End your long day with a drink at one of the neighborhood's many bars or clubs that stay open till late in the night.

The best way to access the neighborhood is through Line 2 and Line 3 of the Chengdu Metro. Hotels are in plenty in Jinjiang and offer a nice mix of luxury and affordable options.

Jinjiang is bound by the Chenghua district in the north, which at 110 square kilometres, is one the bigger central districts of the cities. The neighborhood is home to one of Chengdu's most notable landmarks, the West Pearl TV tower. The 339 metre high television tower, other than being a sight to behold against the night sky, also has an observation deck that offers unparalleled views of the city. Not far off is the Eastern Suburb Memory park, which is a one of its kind music theme park. Built on repurposed industrial land, the park has quite an alternative apparel, especially for lovers of music and performing arts. Other than the several music salons and live performance venues, it also has theatres that host several international film and theatre festivals, and a few photography hotspots. Visit the venue for one of the most unique experiences in the city.

The Chengdu Research Base of Giant Panda Breeding is another major draw of the district. Drop by the conservation centre to check in on Chengdu's beloved giant panda and a few other endangered animal species and witness them as they truly are, living in the wild. The many green spaces of Chenghua, along with the Chengdu Research Base of Giant Panda Breeding, are the perfect spots to refresh yourself in the midst of a long day. The largely residential district is serviceable through Chengdu Metro's Line 3 and Line 7. Finding a hotel or nice homestay in any budget range in Chenghua should not be too much trouble.

The northern part of Chengdu's Wuhou district also has a great mix of historic sites, modern entertainment options and hotels concentrated in a rather small area. The presence of several university campuses in the locality has attracted youth crowds for years now. Be it the many Chinese and Tibetan restaurants around the Southwest Minzu University Campus or the sporting facilities of the Chengdu Sports University, the streets in the area are always bustling with activity. The Jinjiang river's waterfront is another major draw of the district with many green spaces and walkways running alongside it. These venues, which include the bamboo forest-heavy Wangjiang Pavilion Park and the smaller and quaint Wolong Park are perfect for an evening stroll and a photography session.

The vast historic complex around the Huili tomb offers more traditional entertainment options within the district. Apart from the many cultural heritage sites including the Huili and Liu Xiang Tombs, the shrines of Han Zhao Lie Miao, Chengdu Wu Hou and the Sanyi Temple, the area has many green spaces and national parks that will keep you interested all day. Especially impressive are the Chengdu Scenic Area, with its lush area accentuated by a small lake and exhibition halls in traditional Chengdu architecture. And lastly, the cultural enclaves of Wuhou are some of the best to experience the city's cuisine. Wuhouci Street and Jinli Street, both offer great handicraft shopping options and home-grown eateries and bars. Do not miss out on trying the Sichuan hotpot at one of these establishments.

The district is serviceable through Line 1 and Line 7 of the Chengdu Metro. While the Chengdu South station lies on the former, the latter is a loop that runs around the downtown part of the city. Hotels are in plenty, with particular concentration around the Huili tomb complex.

Although a little outside the central part of the city, Dujiangyan is definitely worth considering for your stay. Especially if you are looking for a relaxing vacation away from the metropolitan areas, in the abode of natural bounties. With several rivers flowing through the area and forming huge basins, Dujiangyan has been the major source of the city's water needs. But lately, the administration has tapped into the ecotourism prospects of the neighborhood and good things have come of it. The biggest draw of Dujiangyan has to be the Longchi National Forest Park. Other than the sprawling mountain forests, lakes, waterfalls and resorts in the setting, the national park is also home to beautiful wildlife including, but not limited to the giant pandas and antelopes.

Dujiangyan also houses the Quincheng Mount, one of the most significant centres of Taoism. It is believed to be the place of origin of Taoist belief and today has many shrines and temples central to the faith; the most stunning of those are the Shangqing and Jianfu palaces, and the Laojun pavilion at the summit. The Rear mountain, as part of range is referred to, offers engaging experiences including hiking options, tranquil walking trails through the forested areas, caves, picturesque waterfalls, and, of course, stunning views of the lush green surroundings from the top. The district is a high-speed rail ride away from the city centre, but is also accessible through road via the National Highway 317. Hotels and resorts are in plenty, with especially beautiful landscapes surrounding them.

That's all from our side, traveller. Take your pick and start packing for your next trip; the country of heaven awaits you! 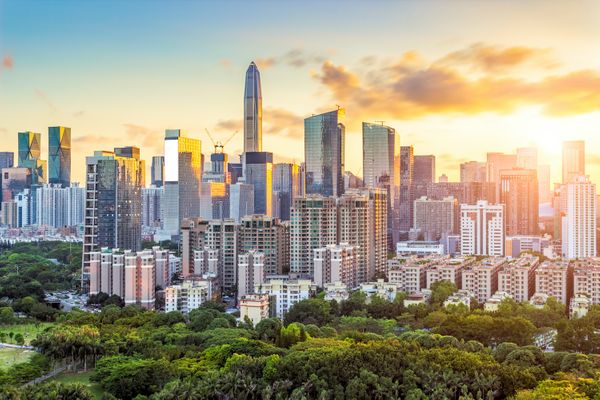 The development of Shenzhen, a yesteryear fishing town located on top of the Pearl River estuary as one of China's Special Economic Zones, has been quite incredible. The city today, 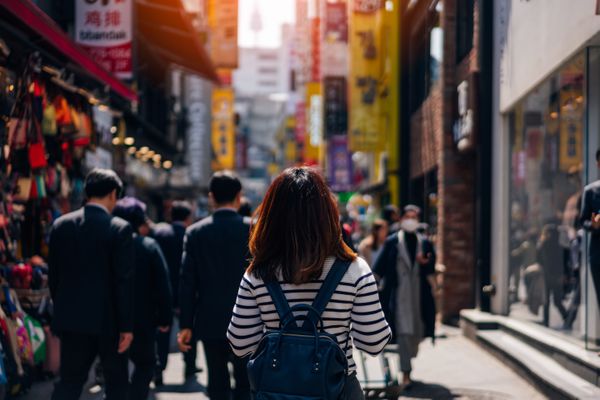 See also: 30 Best Things to Do in Seoul Myeongdong, one of the most flourishing Korean cities, is a fashion hub and a paradise for makeup and cosmetics lovers. The